say what? say nothing...

i haven't been blogging recently!
nor feeling any urge to do so...

but i still love my blog!
it's a precious, thoughtful record of what I've been through,
and I enjoy looking back (when i have the time... which is none recently...)

I wanna talk about our EPs finally being mailed out!
and also AMIT concert which I enjoyed so much!!

but i wanna let pictures do the talking
and i'm lazy to upload pictures.


so instead I'm gonna share with you my thoughts on being a musician.

i think it's so much more hard work and effort to be a good musician, than a good singer!

Being a singer, you are entitled to your own interpretation, your own style,
and you can basically do whatever you want to create some kind of image,
you can even sing like crap but get people to love your style/performance.

Being a musician, you pretty much have no choice but to acquire some chops.
which means hard work and practice.

i'm hardly an instrumental kinda person,
i mainly listen out for vocals in a song...
show me the best musicians to play jazz, or rock, whatever
and i think my focus will wander after a while,
unless they keep surprising me with technicality, or some sort of performance.

But this, I listened to the whole day :)


but at a live show, he keeps you at the edge of your seat.

Thanks Vincent for reminding me how amazing Tommy Emmanuel is!
Posted by K at 3:51 AM No comments:

So for the longest time, there was this nagging feeling at the back of my head that said Time To Update Your Youtube.

Maybe it's your voice I'm hearing?

So my sister Kexin and I recorded this in the dead of some night
and here it is!
She's currently at Riverside, California now, and will be for the next 3 months...
vacationing, and sometimes remembering to study :)

So many people confuse the two of us, thinking I'm her or she's me when they see us on the streets. So here we are together, to set the record straight! :)

wanderlust, my friends, is an irresistible force.


the first day we were there,
we rushed for this live TV interview!

Thanks Selwyn for helping us tag the photos!

On www.hlctv.net, it was a super interesting experience!

You could catch it on TV or online,
and as we spoke we could see sms-es coming in,
and viewers can see their sms-es on the side panel too!

We laughed and chatted,
and played our songs...!

Thanks to pretty host Mifa and my dear friend Danny who helped in this opportunity!

And also to Kenny B, B Gorgor, who lent me his guitar!

hologram specs given to us....
that transforms all points of light into snowflakes...

it was so simple, but so smart!

In fact it was the lovely couple who flew us to Hong Kong for their wedding!

And of course... our show at Backstage,
everyone was so supportive!

We have EPs specially for Khalil Fong and Edward Chan,
hope it has already reached them!

And we're in Hong Kong's Milk Magazine issue #442!
i love the comic drawn by Elphonso! 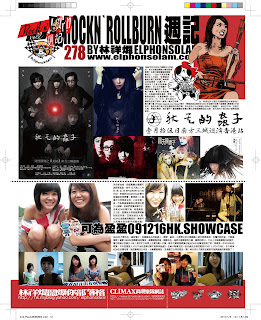 back to printing and delivering our EPs!
much love and gratitude to all our supporters :)

hello to a new year,
hello to man-made divisions in time,
hello to New Year Resolutions that are not followed, nor make any sense.

all throughout the year i have been working hard,
striving for new inspirations,
opening my mind to new things -
i started yoga mid last year,
Japanese classes late last year,
Einein and I jumped onto an EP project late last year and made the impossible possible, by releasing our EP in 2 months, just in time for our Hong Kong show (behold the power of fixed deadlines!)

and I know as New Year approacheth,
that 1 Jan 2010 is just gonna be another new day for all things possible.

1stly,
Was shopping for a new laptop (not for myself though), and it came down to PC vs MAC.
After much fussing around, we decided on a Fujitsu, which everyone knows is a Made-in-Japan high end PC.
We went to 3 stores to compare freebies, and landed a better deal each time.

Eventually we checked out the Apple store,
and fiddled around with iMovie and iPhoto,
and the deal was sealed.

With comparable specs, Apple provided simple straightforward solutions for the non-techie consumer (me),
at a lower price.

Everyone knows there's a Mac, Macbook Pro, Air, Powerbook
and everyone knows, or can guess its function from the name.

Who can name me a Fujitsu model?


Dell, HP, Acer, Compaq, etc - everyone is fighting in their same field with little distinguishing features, it eventually boils down to price competition which can only hurt the brand and its profits.

Mac is languishing in its own field, miles away from PC competition.


In my business and career,
that's what I want to aim for.

To stop petty competition in limited markets, and to reach out and expand into areas that are unconventional - and to provide something different.

It's not easy, it takes time,
but it all starts with a vision.

I become a fan of not only his music,
but his style, and mostly him as a person.

It seem like his music is only a byproduct of his person,
a distillation of what he is and how he lives.

His enduring success is only a byproduct of his person,
a reflection of how his music can spread his message, his personality, and endear him to millions of people.

But i think what endures, is to live fully and consciously,
and to write what means something to you, and what matters,
and when your music becomes a byproduct of your person,
instead of a conscious effort to win hearts and to sell records,
that's when you will succeed.


I hope to share more meaningful stuff in the future,
than the food I ate and the things I bought, etc.

Thanks for following me in this journey :)
Posted by K at 3:33 AM 5 comments: